A study by the Interactive Advertising Bureau and Ernst & Young says the interactive advertising industry in the U.S. is losing $8.2 billion a year to fraudulent impressions, infringed content, and malvertising.

To stop the losses, the IAB and EY say companies must “fix badly designed business processes and repair obvious flaws in the digital advertising supply chain.” 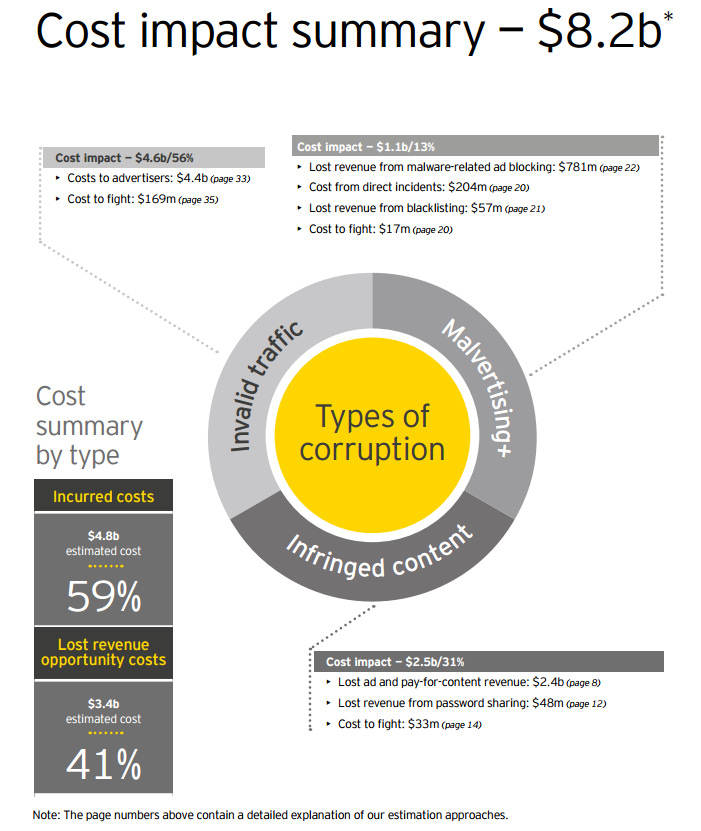 More than half the losses — $4.6 billion — come from “non-human traffic,” EY found. This refers to fake ad impressions created by bots or malware. The researchers said 72 percent of ad fraud losses happen on desktops and 28 percent on mobile.

Malvertising, or ads that expose users to dangerous third-party content, accounts for $1.1 billion of the losses. The IAB said $781 million of that total derives from ad blocking triggered by risky ad content.

But how much time should industry players take away from bringing in new money and give to reducing losses? A lot, apparently.

“We must remain wholly focused on bringing this conversation to the forefront and developing systematic ways of eradicating this activity, enabling both publishers and marketers alike to thrive in this new age,” said Wenda Harris Millard, president and COO of MediaLink, one of the sponsors of the study.