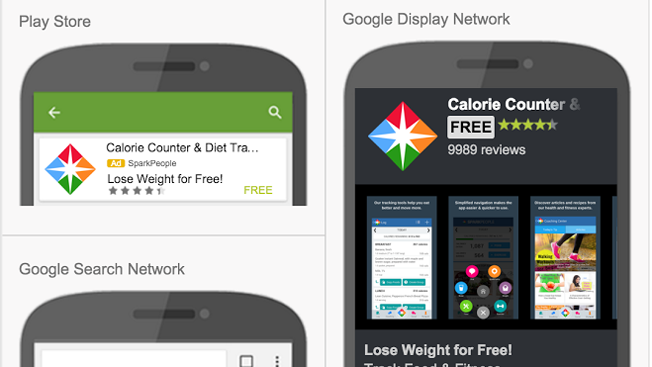 Google says developers running “universal app campaigns” across its network are finding them to be more cost-effective than ads run than other digital platforms.

The Adwords-based campaign option, which Google introduced in September, allows developers to run a campaign across Google search, YouTube, Google Play store and the Google Display network. A developer designates a target cost per install and budget, and then Google automates where across its platforms the promos should go.

As an example, Google pointed to Sparkpeople, which has 15 million users in the U.S. and Canada for its fitness and dieting apps and has been testing the sytem. Joe Robb, the digital marketing director for the company, said that while the cost per install has been slightly higher than he expected, his team is still spending between 30 and 50 percent less than they do on Facebook. The campaign is also now driving about 20 percent of the company’s total downloads.

“I am generally an optimist in life but a pessimist in spending money,” Robb said. “I always expect when I’m going into a campaign that what I think I’m going to get is going to be less good than I want. And I think that’s good. Because it causes me to always tweak, but I will say that these things have performed much better than my expectations.”

Chavez said it can be hard for developers to reach all the inventory available across Google’s properties, but the automated system helps developers to scale much more efficiently. He said Google also is looking into other inventory sources over the next year that it might make available to developers.

“From one vertical it might turn out that display is the place to be, or YouTube or whatever,” Chavez said. “But it varies by advertiser. And again, regadless of what type of advertiser you are, the automation is really important because it basically lets them find the channel that makes the most sense for their app. And that also might change over time too.”

Google has good reason for touting the results, as mobile app install ad spending is on the rise. According to a report earlier this year from eMarketer, total spending was expected to reach $3 billion in 2015, nearly double the $1.67 billion spent in 2014 and about four times the $770 million spent in 2013.